“Each generation adds its own touch” to the Cupboard Café

Walter Bartholomew December 19, 2021 Cafe Comments Off on “Each generation adds its own touch” to the Cupboard Café 17 Views

Closet Cafe Chef Jennifer Leeman holds a cup of Cafe Co-Founder Fred Hatch next to owner and operator Mary Dee Grant on the morning of December 12 at the cafe. (Photo by Nate Poole)

It’s a Friday afternoon in December at the Cupboard Cafe, and owner-operator Mary Dee Grant is busy as she awaits delivery of 17 x 50-pound bags of flour and prepares to pack countless boxes with the her family’s famous sticky cinnamon buns.

The cafe at 137 Huddle Road in New Harbor is only open seasonally, but every December, Grant and his small staff are inundated with vacation orders from across the country for his family’s famous buns.

Food has been a part of Grant’s family tradition for over 90 years, and his heritage on Huddle Road goes back even further.

“Each generation adds its own twist,” Grant said on Dec. 9.

Cyrus and Narcissa Ellis, Grant’s great-great-great-grandparents, settled on Huddle Road in the mid-19th century in the house where Grant’s father still resides. In the 1930s, his great-grandmother, Myrtle Parmenter Crocker McLain, opened a restaurant and inn on the homestead and Grant’s grandparents inherited the operation.

“Our family’s trademark has always been to feed people,” she said. “You didn’t go to my grandmother’s house without being fed, and it didn’t matter if you had already eaten.” 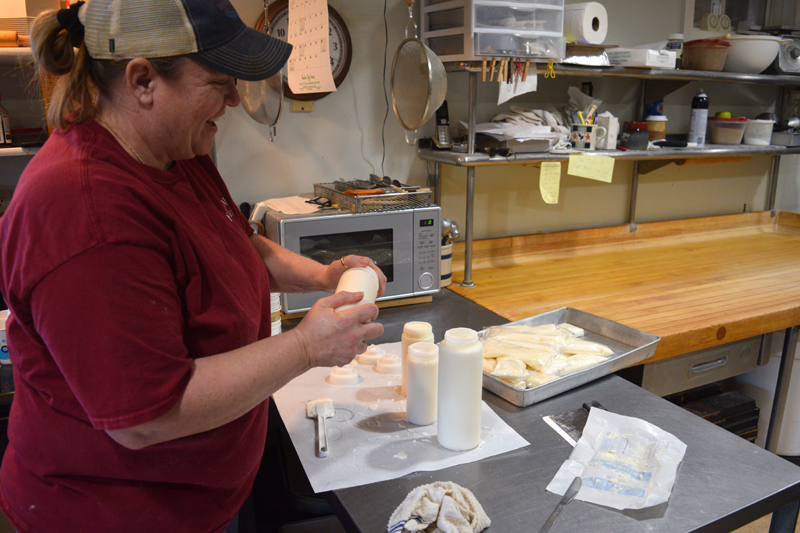 Grant’s parents, Claudia and Fred Hatch, continued the family tradition by opening the Cupboard Cafe in 1995 with Grant and current chef Jennifer Leeman, eventually building their Huddle Road location in 2004.

Now, Grant brings his own entrepreneurial ingenuity to the cafe, but his parents’ fingerprints on the business are indelible.

Claudia Hatch, responsible for coffee’s most popular recipes, worked in the kitchen until her passing in July of this year, and Fred Hatch continues to make dough for coffee to this day, despite his best intentions to take his retirement after a professional life spent between hotcakes and Bath Iron Works.

“The amount of backbone my parents put into this business has made it stand up to a lot,” Grant said. “(They) have laid a solid foundation to build on.”

The buns were meant to be just a small piece of the cafe when it first opened, but soon the lines of customers outside the cafe door, all waiting to order their buns, became regular.

Grant said baking has become a staple of the experience for many full-time and seasonal residents in Bristol.

Grant is not sure what it is specifically about the buns that set them apart and allow people to order each year; Leeman and Fred Hatch put a lot of effort into making them by hand, according to Claudia Hatch’s recipe, and Grant said they meet the essential criteria for the best buns. 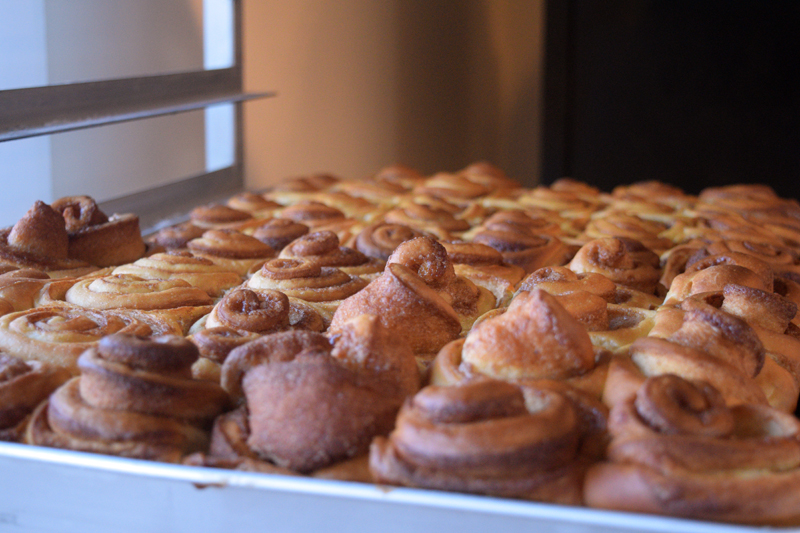 Cupboard Cafe’s famous cinnamon buns chill on a shelf as Jennifer Leeman and Mary Dee Grant prepare to send them to customers on December 12. (Photo by Nate Poole)

Leeman has been a part of the cafe since it opened in 1995, and she’s responsible for baking each bun by hand while Hatch comes in to make the dough. With a lot of creativity and ingenuity, Leeman also makes lamps from old wooden buoys and sells them to the cafe.

“She is the most diligent time management master I have ever known,” Grant said.

After a few years of mostly seasonal operation, Grant and his parents learned that residents would order the buns even after they were gone for the season, so the cafe began shipping them across the country.

The kitchen will bake up to 45 dozen buns a day and ship them three days a week with a Sunday prep. The buns are baked, cooled and packaged the same day they are shipped, with the frosting sent in a bag separate from the buns.

Grant takes care of the order processing and packaging, and she goes so far as to handwrite a note for each box. It’s a Thanksgiving marathon until the last local coffee pickup day on December 23, in which Grant and his small team are usually exhausted but inundated with gratitude.

“We didn’t do anything big to make it grow. It was all word of mouth and just very slow and steady development, ”she said.

Since he began offering nationwide bread roll shipping throughout the four seasons, Grant has started looking for other ways to continue operating through the fall, winter and spring without fully open the cafe in person. 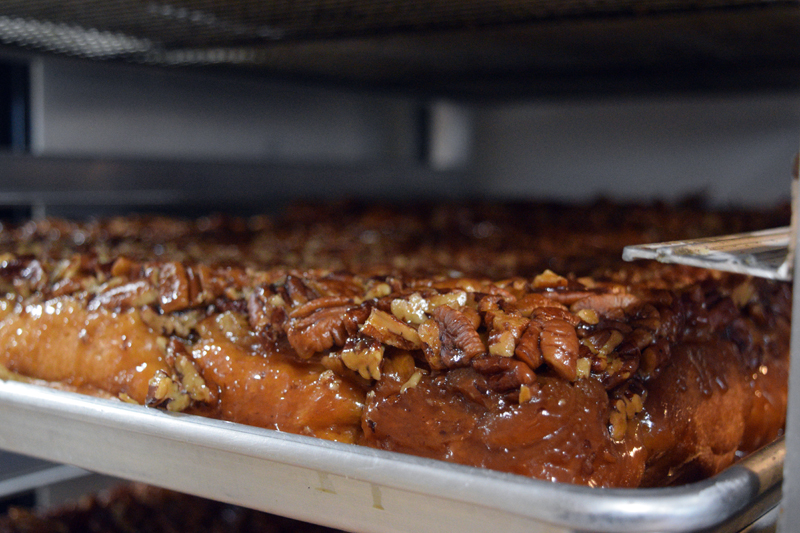 The Cupboard Cafe offers sticky pecan buns and cinnamon buns for nationwide orders after Thanksgiving and they’re available for local orders and withdrawals until December 23. (Photo by Nate Poole)

So Grant, Leeman and Hatch launched their first Cupboard Cafe Market this fall. The market has a weekly meal rotation, including pies, pizzas, chowders and other popular recipes from the coffee repertoire that customers can pre-order and take home on a set day each week.

Like orders for cinnamon and sticky buns, the fall market was built on another of Claudia Hatch’s most popular recipes: her chicken pie. From there, Grant and Leeman continued to develop the menu.

Grant said the market was hit this fall and some customers have gone so far as to buy a few meals at a time and freeze some for the rest of the week.

After a short break, the market will return around mid-January.

The fall market is just another twist the Grant family has added to their restaurant business. Pursuing the family business was something that came naturally to Grant, but she stressed that the business wouldn’t be the success it is without the community around it.

“What a blessing … we are sitting here in the middle of New Harbor and we are talking with people from all over the country and we are part of the traditions of the people … and this is just one of the best,” said she declared.

The last local coffee pickup for the holiday season will be on December 23. Those interested in ordering buns before Christmas should call the cafe at 677-3911 and visit thecupboardcafe.com for more information.