Reynolds is a key figure in the ‘partygate’ scandal over lockdown-breaking parties hosted by Johnson and his staff during the coronavirus pandemic. He sent an invitation to around 100 staff to a ‘bring your own booze’ garden party in May 2020, when Britons were banned from socializing in groups under restrictions aimed at slowing the spread of COVID-19 .

This week, Gray released an interim report examining the four parties that police are not investigating. She found that ‘flaws in leadership and judgement’ allowed events to happen ‘that shouldn’t have happened’ and described a Downing Street operation marked by excessive drinking and dysfunctional dynamics .

Johnson apologized and pledged to fix problems in his office, but did not admit to personal wrongdoing.

A TV reporter highlights sections of a printout of a report by civil servant Sue Gray, about parties held in Downing Street during the COVID-19 lockdowns, in central London, January 31, 2022. ( Tolga Akmen/AFP)

The Prime Minister’s grip on power has been shaken by revelations that his staff have been hosting ‘bring your own booze’ office parties, birthday celebrations and ‘wine Fridays’ in 2020 and 2021, while millions of people in Britain were barred from meeting friends and family.

Lawmakers from Johnson’s Conservative Party are considering whether to seek a vote of no confidence in the leader that won them a large parliamentary majority just over two years ago. Under party rules, such a vote is triggered if 15% of party lawmakers — currently 54 people — write letters asking for one. If Johnson lost such a vote, he would be replaced as party leader and prime minister.

It’s unclear how many letters have been sent, although a handful of lawmakers said this week they were seeking a vote of no confidence. Tory discontent grew after Johnson on Monday accused opposition Labor Party leader Keir Starmer in the House of Commons of ‘failing to prosecute Jimmy Savile’ when he was director of public prosecutions from the United Kingdom. Savile was a veteran TV personality who was revealed after his death in 2011 as one of Britain’s worst serial sex offenders. 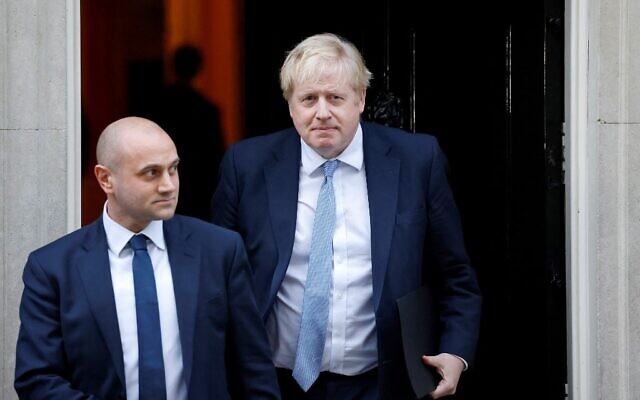 Britain’s Prime Minister Boris Johnson leaves 10 Downing Street to deliver a statement to MPs in the House of Commons following the release of the Gray Report, in central London on January 31, 2022. (Tolga Akmen/AFP)

Starmer said it was “a ridiculous insult peddled by right-wing trolls”, and some conservatives also balked at the attack. Mirza, who has worked for Johnson since he was mayor of London ten years ago, resigned following Savile’s comment.

‘You are a better man than many of your detractors will ever understand which is why it is so desperately sad that you have let yourself down by bringing a scurrilous accusation against the Leader of the Opposition,’ she wrote. in a resignation letter, published by The Spectator magazine – of which Johnson is a former editor.

As Johnson’s troubles mounted on Thursday, a government minister, Chief Treasury Secretary Simon Clarke, was asked by Channel 4 News if it looked like ‘the last days of Rome’ in Downing Street.

“The last days in Rome, I think, were more fun,” he said.

The climate crisis and responsible journalism

As an environmental reporter for The Times of Israel, I try to convey the facts and science behind climate change and environmental degradation, explain – and critique – official policies affecting our future, and describe the Israeli technologies that can be part of the solution.

I am passionate about the natural world and discouraged by the dismal lack of awareness of environmental issues shown by most of the public and politicians in Israel.

I am proud to do my part to keep The Times of Israel readers properly informed on this vital subject – which can and does lead to policy change.

Your support, through your membership in The Times of Israel community, allows us to continue our important work. Would you like to join our community today?

Join the Times of Israel community

Already a member? Log in to stop seeing this

Are you serious. We appreciate that!


We’re really glad you read X Articles from The Times of Israel over the past month.

That’s why we come to work every day – to provide discerning readers like you with unmissable coverage of Israel and the Jewish world.

So now we have a request. Unlike other media, we don’t have a paywall in place. But since the journalism we do is expensive, we invite readers to whom The Times of Israel has become important to help support our work by joining The Times of Israel community.

For just $6 a month, you can help support our quality journalism while benefiting from The Times of Israel WITHOUT ADVERTISINGas well as access to exclusive content available only to members of the Times of Israel community.

Already a member? Log in to stop seeing this

Previous 8 Big Restaurant Chains With Bad Reputations – Eat This Not That
Next Café, housing planned for a historic house in downtown Columbia